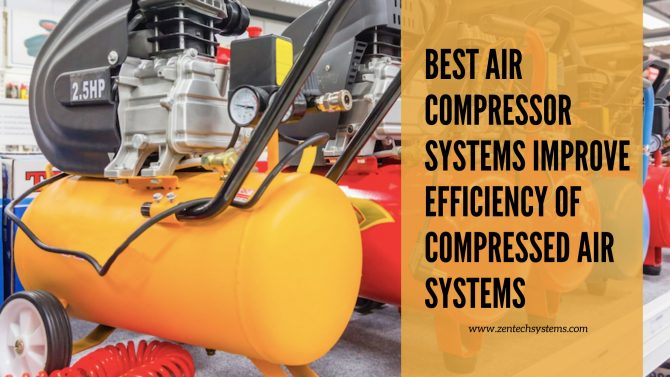 Compressed air, frequently referred to as the ‘fourth utility’ in a wide range of applications, is an immensely valuable asset for industrial plants. However, many apparently well-maintained compressed air systems are plagued by considerable loss of energy, resulting from diminished compressor efficiency. Best air compressor system can help in eliminating abrupt leakages (as opposed to ‘planned leakages’, like drying, blowing and such leaks) and, can bring down the output of compressed air systems by close to 30% – causing significant operational as well as financial losses.

What are some of the main reasons why removing leakages from compressed air systems must be an absolute priority for plants:

Necessity Of Ironing Out Problems In System Operations

Due to the presence of leakages, there can remain extra, unused compressor capacity. This, in turn, causes overall expenses to spiral upwards. Random fluctuations in the system pressure are also likely to have serious adverse effects on the efficiency of the different air-based tools and equipment. Compression system leakages also result in higher run times and additional cycling – and the average service life of the systems goes down too. Compressed air leaks typically increase with elevated system pressures. Such problems make the maintenance needs of the air compressor package more complicated as well. It is extremely important to regularly check the pipe joints, tubes & hoses, flanges, valves, couplings, and other areas of the compressed air systems where leakages are likely to occur.

Removing The Risks Of Infiltration

Infiltration is often a major issue in compressed air systems with leakage problems. Particulate matter can come in through the pipes/ducts, and these particulates (together with water) tend to block the systems. Apart from diminishing the service quality, such blockage can significantly reduce instrument longevity as well. Moisture infiltration is also likely to cause corrosion and metal pitting, escalating the problems further. The efficiency of the air systems can take a bigger hit if they start to expand and contract as a result of infiltration. Unless these problems are detected and resolved at an early stage, the output from compressed air systems will remain sub-optimal.

Leakages in compressed air systems can considerably pull up costs, particularly since they are not often detected early. A recent report (from Compressed Air & Gas Institute) found that the cost of even a 0.25” leak can be northwards of $7500 annually. Apart from increased repair/replacement costs, the overall lifecycle expenses also go up exponentially due to leakages. The consistency and functional efficiency of best air compressors also get negatively affected. The importance of conducting regular leak edits comes into the picture right here. These checks help in reducing mechanical fatigues in the compressed air systems, while energy expenses are also minimised.

Industrial Plants Cannot Afford To Lose Too Much Compressed Air

Compressed air systems are pricey – there are no two ways about it. On average, the production of 1 HP air power requires more than 7 HP of electrical power. Even in the best-maintained air compression systems, approximately 80% power is lost in the form of heat. On top of this, leakages cause further losses of compressed air – something that the industrial plants can ill-afford. Hence, leak management is the key for maintaining the optimal operational efficiency and cutting down on additional expenses. When leakages are removed by experts, the efficiency of the compressed air systems remains intact.

The Problem Of ‘Fugitive’ Emissions

These are probably the most problematic type of compressed air leakage, since they cannot be identified quickly at source. Relatively older air compression systems are particularly prone to such leaks. While building an air system too, care has to be taken to ensure that these leaks are not present. These ‘fugitive’ system leakages generally place huge burdens on both the financial as well as the manpower resources of industrial plants. Over time, users of industrial compressed air systems have to be increasingly careful about such leaks. If neglected, these apparently small ‘unplanned’ emissions can cumulatively lead to large energy losses. Hence, these leakages have to be removed on priority.

At 8,760 hours per year and 10 cents per kW an efficiently operated compressed air system will consume the airflow and cost listed in the upper table while running at 100 psi.

Leakages cause both short-term glitches as well as long-term problems in the performance of compressed air systems. If not found and fixed properly, the leaks result in significant loss of pressure. Risks of serious trips and long system downtimes go up as a direct result. In general too, the workload of air compressors goes up a lot due to the presence of leakages (i.e., more ‘work’ has to be done to produce the same amount of air power). The consequent losses – both in terms of energy and time – are considerable. To remove such performance issues, ensure seamless operations and optimise productivity – the importance of fixing system leakages is paramount.From maximising the productivity levels of compressed air systems and enhancing their longevity, to reducing maintenance requirements and minimising problematic downtimes – removing leakages from these systems has several important benefits. Researches have shown that, identifying and fixing leaks in a systematic manner can bring down the leakage amount to less than 10% of the final output (this figure is typically upwards of 20% in sub-optimally maintained plants). Hence, the importance of removing leakages in order to build efficient compressed air systems can hardly be overemphasised. Zentech Systems, the top air compressor suppliers in Kolkata offers end to end 360 degree solutions for air compressor needs. Consider subscribing to our blog and letting us know your views in the comment section below.

What’s The Difference Between Reciprocating Air Compressor and Screw Compressor?
Among the various types of air compressors currently available, reciprocating…