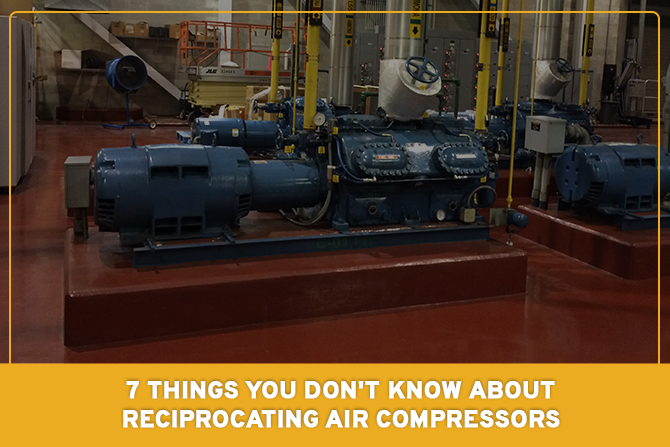 The reciprocating air compressors are common and most used industrial equipment installed in large-scale plants. It is a combination of the cylinder, piston, gas chamber, and valves that are used to release gas in a force. Oil refineries, chemical plants, natural gas plants are some of the industry that uses this equipment for various mechanical applications. They are energy-efficient with a robust design. The pistons attached are to be moved in a reciprocating manner that compresses the gas which is discharged with a high pressure outside. It is the mechanism of compressing air for industrial use. Many industries install these air compressor as it produces kinetic energy which the major scientific principle behind that works behind the scene.

Regardless of its type and version, it is installed in every industrial plant. They are efficient and best for industrial use. However, these compressors look easy to operate but require rigorous training before final operation. Any incorrect installation can lead to odd vibrations, loose seals, and unwanted cranky noise. It can also pose danger to the employees handling such giant machinery.

Here are some of the unknown factors about these compressors that every engineer operating them might not be aware of:

As far as industrialization is concerned; these compressing techniques are used for ages. However, the first air compressor introduced in the market was the reciprocating air compressor used to compress natural gas. It was invented in 1799 by George Medhurst. It was the first motorized compressor that was used in mining.

2.   Around 80% of the Large Scale Industries use Air Compression Techniques:

When air is compressed, the molecules are forced to stay with lesser space between them. It created pressure, weight, and heat. The heat generated by the reciprocating air compressors is 15,276 to 17,822 Btu/hr.

In general, the noise level created by the air compression technology is around 40 and 92 decibels.  Any noise created by the compressors of 85 dB is harmful to the eardrums. The single-piston model creates more noise than the double-piston compressor model.

5: The Screw Compressors are the Most Popular after Reciprocating Compressors:

One of the reasons for the same is the reduced noise levels. It is considered the most silent compressor in the industry.  The air is compressed in two screws that cause pressure in the gas.

6: Scroll and Reciprocating Compressors can be Interchanged:

A scroll compressor or a scroll pump is interchangeable with reciprocating compressors. However, special tubing and other mechanical modifications have to be done by a professional.

7. Compressors can cause Hearing Loss:

Any air compressor that produces more than 85dB sound is harmful to the auditory nerves in the human body. Anyone exposed to this sound for more than eight hours can turn deaf.

Reciprocating Air compressors have a shelf life of 10-15 years. Once installed with proper maintenance; the life span can increase to twenty years. With modern engineering effort and the advancement of technology, air compressors deliver great performance and reliability. Zentech Systems, the largest and authorised supplier of top brand reciprocating compressors also offer after sales service support. For more info, consider subscribing to our blog and let us know if we missed mentioning any info here which might be helpful for our readers.

Importance Of Backup Compressed Air Systems
All machines, no matter how advanced they might be, can…

Ways To Maximise Air Compressor Efficiency and Minimise Costs
In a textile mill, energy savings is an important issue.…