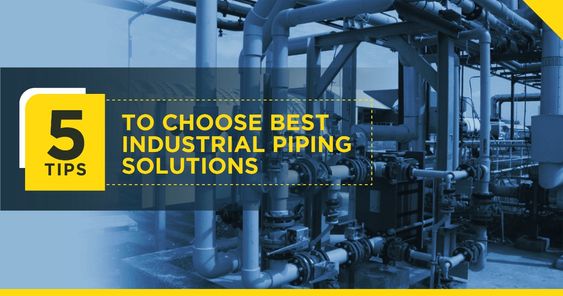 Choosing the right industrial piping solutions for a business is the most crucial decision that needs to be taken. Wrong or improper piping systems can bring about many adversities, resulting in huge losses for businesses. In the scenario of the compressed air piping setup not being done well, the overall energy costs will soar up, the equipment may get damaged and fail (threatening the safety of anyone around/near it), production efficiency of the company can fall to a great extent, and maintenance services will become more hefty.

Tips to keep in mind while choosing the right piping solutions:

Galvanised Pipes are primarily common, as galvanising coating increases service span and provides a certain level of rust resistance. However, it is still susceptible to corrosion. The galvanised plating gets corroded over time and flakes off, causing blockages in the compressed system – and becomes safety hazards. These pipes have a higher friction factor, which increases pressure drop across the network.

Stainless Steel SS304L or SS316L won’t degrade or corrode, but it is problematic to install because of its weight, especially if the pipes are suspended and also due to its high cost. Both aluminium and copper are corrosion-resistant and lightweight. These materials are easy to cut, weld and suspend – making installations with such pipes seamless. Compressed air which is delivered through aluminium and copper pipes is clean and free of any flake or rust debris. However, like stainless steel, these pipes have a higher cost but require very less maintenance.

Plastic Pipes are cheap, corrosion resistant and easy to install. However, PVC pipes are extremely dangerous for any compressed air application as they can swell and explode at high pressures, sending out razor sharp PVC shrapnel, fatally injuring anyone within close proximity. Plastic pipes also degrade over time and become brittle, increasing the possibilities of leaks or explosions as they age. There is a risk of paying hefty fines from regulatory authorities and even a probable shutdown of the business if it is found that plastic pipes are being used for transportation of compressed air.

To avoid excessive fluctuations in air pressure, the two most important aspects of the compressed air system are – Total airflow (CFM) and Minimum required operating pressure (PSI). When the pipes are too small, the distance the air has to travel is longer, experiencing more friction – which ultimately slows down the air even more. This leads to greater pressure drop. To make up for this pressure loss, one may have to increase the overall PSI of the system. This drives up energy costs for your air compressor significantly.
Large compressed air pipelines require more materials to install, which increases the cost in comparison to a piping system with smaller pipes. Larger pipes have the capacity to store more air though it’s not the most effective way to store air. It’s more cost-efficient to just buy more or larger air receiver tanks.

The most complex challenges that come up in the process of designing a compressed air piping system are – sharp angles, obstructions and moisture. Any sharp angle in the piping system is guaranteed to slow down the airflow, reducing pressure. 90-degree elbow corners should be avoided as much as possible, which can otherwise lead to turbulence, dropping the pressure delivery. Hence, it is advisable to go for smoother corners ranging from 30-45 degrees.
Moisture is an inevitable by-product of air compression. Ambient air has a certain percentage of humidity. On compression of air, the water in it condenses into a liquid state. Water corrodes certain pipe material, causing rust flakes to disintegrate and break – which travel through the piping system. To deal with this unavoidable phenomenon, dryers and coolers can be installed to reduce the percentage of water content in the compressed air before it enters the piping system.
Corrosion leads to formation of rust particles to form, which slowly flakes off over time and flows around the system along with the air flow which causes obstructions or blockages in the interior devices and end-use nozzles. This leads to only one big problem – drop in the air pressure.

A drip leg is a piece of attachment that allows the condensed water to escape from the pipe, which compressors squeeze out of the air without doing any damage to your equipment. One just has to remember to drain it or install an automatic drain on it. A drip leg is very easy to set up, and it is strongly recommended even if a dryer is already present, since it will serve as a contingency in case the dryer fails.

There can be damages or breaks in any system part or component, requiring urgent changes or repairs. A ball valve allows the isolation of the broken component from the system. One should always install a ball valve, either before or after all major components to facilitate easy repairments. Similarly, installing a union before or after all major components as well as between pipes is recommended. If any part needs to be replaced, a union can save many hours of labour. Inserting unions also speeds up the installation process of industrial piping solutions.

In order to setup a proper compressed air piping system, there is no need for any rocket science or hardcore brain racking – but just a systematic reasearch. Look out for reliable suppliers for genuine materials and equipments, and abide by the laid down safety guidelines by the authorities to ensure proper compressed air industrial piping solutions which will be both cost-effective and secure.

Maintenance Tips Ways To Extend The Life Of Your Air Compressor
After acquiring an air compressor, furnishing it with regular and…